We are well into the school summer holidays so crafting is a little slower than normal but I have been itching to use the new pip beads I bought in my local bead shop. They are lovely and unlike anything I have used before. Think squashed apple pips with a hole in the pointy end! I soon discovered that because there was only one hole in the beads and this was down one end that once threaded they had a habit of folding in on themselves and needed a support to hold the pattern in place.

Much practice was had accompanied by lots of frustration.

I decided they were impossible to use. 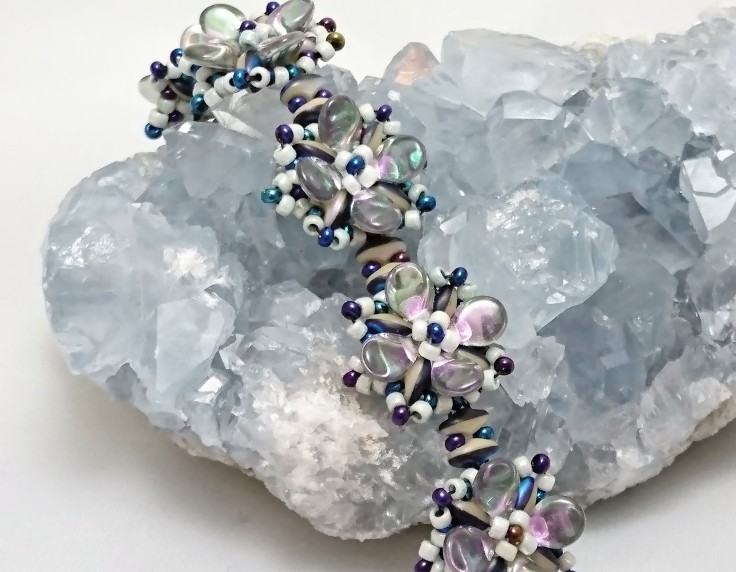 You know the feeling when it all fall into place.

I am now in love with pip beads. I accidentally bought some more but in my defence I was suffering from shock after school shoe shopping plus a pair of trainers for my son who it seems is storing all his food in his feet (the total shoe cost could have fed us all for a week or more). £1.75 (x3!) for a pack of pip beads didn’t seem so bad.

I also have some new props from a recent trip to Derbyshire – a little trip down memory lane for my husband and I and an exciting trip for my kids who have recently become fascinated with semi-precious stones. We visited Bakewell and Castleton (known for it’s Blue John Stone). My daughter took delight at the sight of all the Bakewell tarts and my son took his time carefully choosing some special gems to decorate his bedroom. He is playing at a friends house tomorrow – He has already selected which gems he is taking to show off!

A few more shots to give the new props a test run. 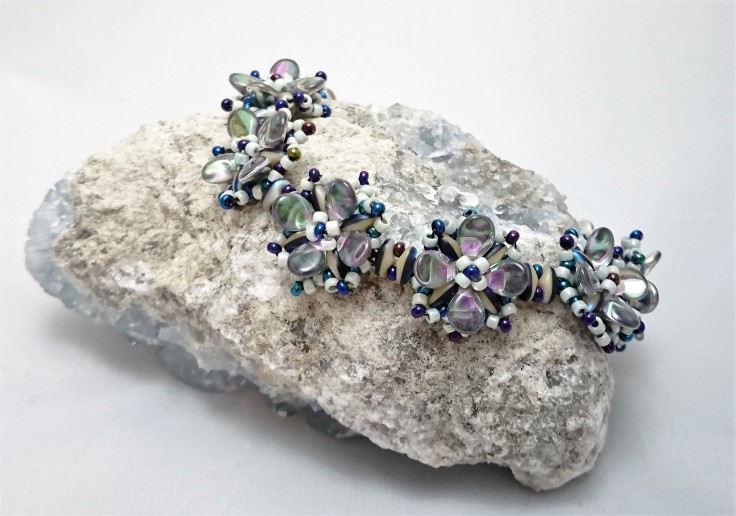 The thing that pleases me the most about this bracelet is that the underneath is as pretty at the top. There is a careful pattern of seed beads under the pip beads to give them much needed support. 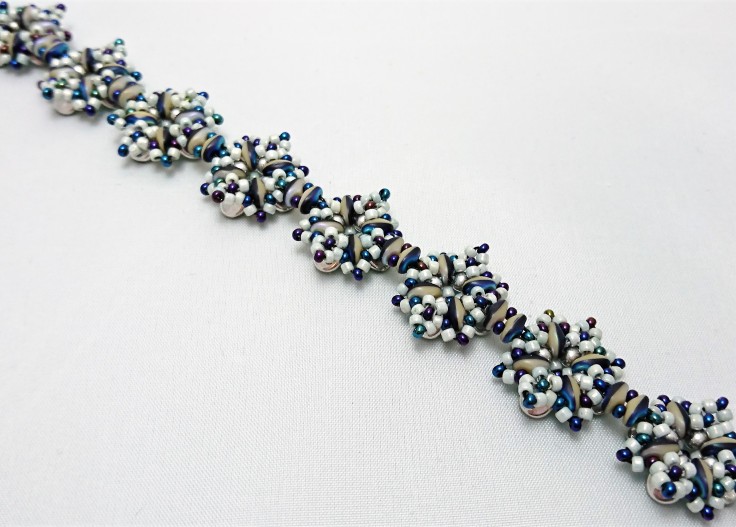 Along with the pip beads and size 11 seed beads are some lovey two tone super duo beads.

This site uses Akismet to reduce spam. Learn how your comment data is processed. 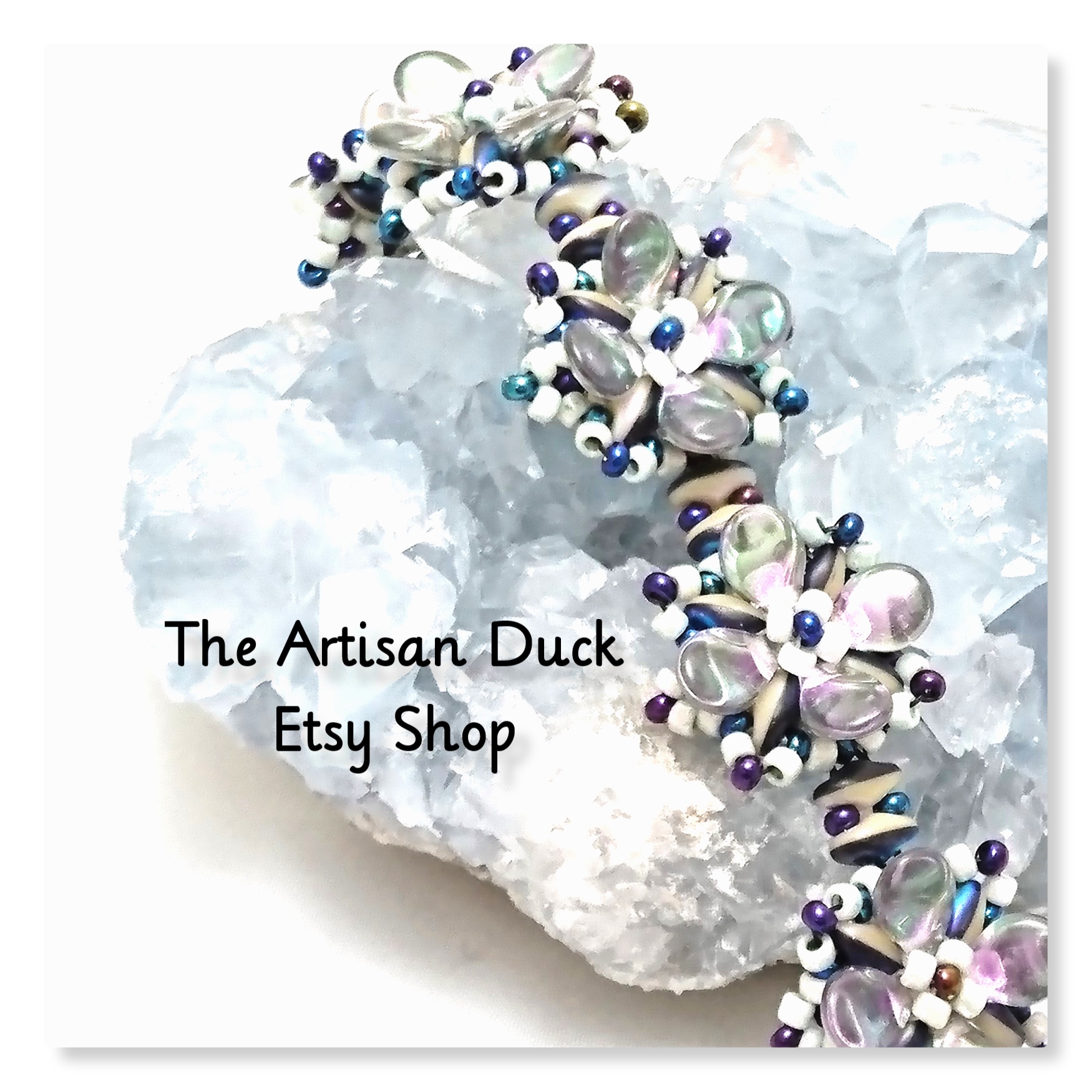 Question - will I ever be able to bring myself to cut into my dachshund polymer clay slab? 🤷🏻‍♀️ I treated myself to some new cutting shapes from @pacpentheclaytool and I am in looooove.
🌟 New 🌟 In 🌟 My 🌟 Etsy 🌟 Shop 🌟 The fact the this video is awful hasn't escaped me but if photos just don't do it any more then maybe this will 😜😅😆
Anyone else relate? Oh Etsy, how I love you and hate you all at the same time
Just saying hi 👋 with a little throw back to a polymer clay with beaded bezel pendant I made for @beadandjewellery in 2020. I love the colours in the necklace - they make me feel warm and summery (whilst I'm sat in my thickest jumper!)
Happy Valentine's day. This lovely trio of hearts brickstich tutorial is available on my blog/YouTube if you wish to keep the love going ♥️♥️♥️ Do you celebrate Valentine's day? I bought my husband new glasses the other day. Nothing says love like the gift of clear sight! 😂 🤓
A little magic with my elephant desk pet
I was making a fresh batch of elephant key rings the other day (as you do) and thought that elephant desk buddies would be very cute so, ta da, cute little elephants to decorate you room.
Who doesn't love a little video zoom through a tutorial?! Happy Friday folks. Little link in my bio for the full, much slower polymer clay ring dish (Valentine's edition) tutorial.⁣
Advertisements